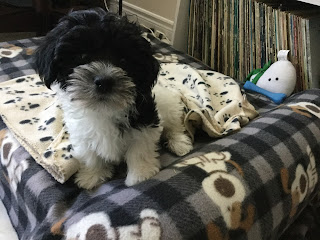 On 22  September, I went to Fredericton and returned to Chez Rockwell with a housemate; an 8-week old male Havanese puppy. His name is Mr. Malcolm. Miss Lexie and I have been in a bit of a funk since Mr. Digby left us in June. A puppy would liven up the place.

Several nights ago, I couldn't find Mr. Malcolm. I called and called. Nothing! I was freaking out. Panicked. I called my dinner and a movie pal (shouldn't have done that!) Called my next door neighbour (they were already in bed! oops). Didn't have my village friend's cell number so couldn't get in touch to cancel her visit. Mr. Malcolm made an appearance. No clue where he was. The next day, I discovered his hiding place. He had crawled under my lounge chair from the back and had brought a chew toy in with him.

I told my sister-in-law about his exploits and she shared about an accident with a puppy, one of a pair of 8 week old little rascals belonging to a friend; one of them had his neck crushed in a chair such as mine. What a horrific accident and how very sad for everyone who loved that little puppy.

Wasting no time upon learning of that tragic event, I acted immediately. I folded up an old Quickie wheelchair cushion and positioned it in the space under the bottom of the chair. It fills almost the entire space so there’s no way Mr. Malcolm can pull it out or get around it.  Since blocking off access, he’s shown no interest in poking around. Win for me!

Then I began thinking about what other things he’d find to entertain himself. Shoes!! So far, though, he's not gone after the row of footwear lined up under my bed.

Mr. M. has enough toys to keep him entertained for years; the kitchen has a step down into the laundry area, adjacent to the TV room/office, separated by a wrought iron gate purchased in the early 80s when I got my first puppy.  It has been well used through the live of many terriers and several cats.   Confined on the laundry room side, the little explorer pinched his snout on the lower portion of that gate where part of the ornate design is just wide enough for a furry face. Squeal! I picked him up and looked him right in the eyes and said “NO”, as I pointed to the gate. He tried to bite my nose but he got the message. No face planting on the gate since.

As a person with gait/movement disorder, I wanted a dog no taller than a coffee table, full grown. All of my canine companions have met that criterion. It’s important if you have a puppy (of small breed, particularly) or or planning to get one, police all trouble spots thoroughly. And a big FYI - crate training is CRITICAL. Just DO it!

I haven’t had a puppy for decades and as Mr. Malcolm started exploring a world away from his mother and littermates, I questioned whether I had lost what’s left of my mind. Nah! I’m up for this.

Still uprightly mobile at 66, I recently received a great compliment from a visiting physiotherapist who said I was one of the most flexible people she’s met who is aging with cerebral palsy. All the hands and knees floor scrubbing, incorporating exaggerated stretching motions, has paid off.

I’ve decided that I need a push broom to clear Mr. Malcolm’s toys out of my way as I negotiate the TV room/office; there are squeaky toys and plushies everywhere. No point in putting them back in the toy basket each evening; he’ll just drag them out again and start flinging. Once he’s over the teething phase, we will be having proper play time; he’s already learning to sit/stay. I toss a toy and he’ll bring it back, but not consistently. He’d rather lie on it.

The other day, through the gate, he saw me scrubbing the kitchen floor and his head was going back and forth like one of those bobbleheads toys folks have mounted on their car’s dashboard. So funny. Then, he started barking that high-pitched baby dog bark. There’s no way I’m allowing him to be anywhere near me when I’m scrubbing; he’d totally destroy my multi-tasking routine of floor cleaning and spine stretching. Visions of  finger nips, pulled hair and upset pails of water danced in my head. Nope, not gonna happen! Maybe by his first birthday! There’ll be no official greeter role at Halloween for him either; thankfully, I don’t get trick or treaters. I’d be exhausted having to  go to the door multiple times.

Though no tree for Christmas 2020 at Chez Rockwell, there’ll be lots of seasonal music. Maybe Mr. Malcolm will learn to sing!

Carla Rockwell is a freelance writer and disability rights advocate living outside Fredericton, NB with Miss Lexie, a rambunctious Maltese and Mr. Malcolm, the boisterous Havanese. She can be reached via email at Carla MacInnis Rockwell

WALK, DON'T RUN WITH CARLA
Living with since birth spastic diplegic cerebral palsy has posed challenges that were overcome, often by sheer force of will. My mission in life is to be a guiding light for parents raising children with challenges so that they may realize, as they are able, that disability will never define them and may well be impetus for them as they venture into education and a career path. Independent living, with an awareness of the importance of health and wellness, are key to a happy life. And yes, we are what we eat.